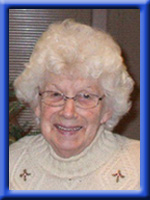 Born in Brussels, Belgium, she was a daughter of the late Richard and Marie (Vermeire) Muelebroeck.

Marie, along with her late husband Ernest, ran a dairy farm for many years. She enjoyed playing cards and bingo as well as wintering in Florida where she made many friends. She was a loving mother and grand mother and will be fondly remembered by all who knew her.

She is survived by her daughters: Josie Barry of Maitland; Barbara (Greg) Tanner of Blockhouse; Julliene (James) Chandler of Cape Sable Island. Her sons: Richard of Bridgewater and John (Julie) of Lunenburg. 8 grandchildren and 11 great grandchildren. Her Sister Pauline Coudron of Belgium and her brother John (Louise) of Belgium.

She was predeceased by her husband Ernest. And her sister Jaenne.

Visitation will be Wednesday, July 14th, 2010 from 7 until 9 p.m. and funeral service will be Thursday, July 15th, 2010 at 2:00 p.m. both in Chandlers’ Funeral Chapel, Liverpool. Reverend Judy Cross officiating. Burial will be in Christ Anglican Cemetery, Maitland. Family flowers only, donations may be made to Parkinson’s Foundation of Nova Scotia, Queens Manor, Liverpool or to the charity of your choice. Online condolences may be made at www.chandlersfuneral.com

Offer Condolence for the family of Suederick; Marie Louise