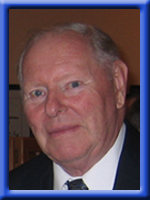 STUEWE, Richard Allen “Dick”  – Dick was born on February 26, 1929 in Great Falls, Montana, and passed away peacefully with his family at his side on October 17, 2010, at the age of 81 years in Valley Regional Hospital, Kentville, NS

Dick moved to Sydney, Nova Scotia at the age of nine months. After graduation from Sydney High School, Dick joined the Bank of Montreal, where he spent his entire career of 37 years, primarily within the Atlantic Provinces, before retiring in 1984. Dick was always active in the community, no matter where his career with the bank took him and his family. While living in Liverpool, Nova Scotia, he served as President of the Kiwanis Club, President of the Children’s Aid Society, and Treasurer of the Liverpool Chamber of Commerce. Dick also faithfully served the Catholic Church in different capacities and Parishes. He was one of the first Lay Readers, at the Mary Queen of Peace Parish in St. Johns, Newfoundland, Eucharistic Minister and Chairman of the Parish Council at St. Anthony’s Parish in Hubbards, Nova Scotia, and was proud to serve as the first Chairman of the St. Gregory’s Parish Council, when it was first formed in Liverpool. Dick was Past Grand Knight of Halifax Council 1049, Honorary Member of the Knights of Columbus, and Honorary Member of the 4th Degree Knights of Columbus.

Visitation will be Tuesday, October 19th, 2010 from 4:00 p.m. until 6:00 p.m. in Chandlers’ Funeral Chapel, Liverpool.  Funeral service will be held at 11:00 am on Wednesday, October 20th, 2010 at St. Gregory’s Catholic Church, Liverpool. Father Brian Murphy officiating. Burial will be in St. Gregory’s Catholic Cemetery, College Street, Liverpool.  Family flowers only, donations may be made to the Canadian Diabetes Association or to any charity of choice. Online condolences may be made to www.chandlersfuneral.com.

Offer Condolence for the family of Stuewe; Richard Allen