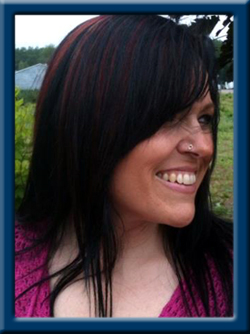 Strum- Norma Lynn It is with extreme sadness that we announce the passing of Norma Lynn Strum (née Johnson) on January 28th, 2016 following a short battle with liver disease.
Norma was born in Halifax on November 14th, 1965 to parents Linda Leslie (Curtis Maillett) of Brooklyn and Alan (Adele) Johnson of Petite Riviere.
With the exception of a few years in Halifax and in Ontario, Norma grew up in East Port Medway on the South Shore of Nova Scotia, but always considered Liverpool to be her home. After graduating from Liverpool Regional High School in 1983, Norma continued her education at Mount Allison University, earning a Bachelor of Arts in History and Political Science in 1986 at only twenty years of age. Norma married the father of her children, Bernie Rechnitzer, in 1989. Together they moved to the West Island of Montreal, where they had their four children. In 2005, Norma, Bernie, and the kids moved back to Nova Scotia, settling in Bridgewater. In 2010 Norma married her high school friend Stephen Strum, who became “Papa” to the children, and soulmate to Norma.
Those who knew Norma understood that she was passionate about her youth care work, which started at Alternative Programs for Youth and Families in Bridgewater, and eventually brought her to the Nexus program in Kentville. Norma devoted herself to her family first and foremost. She loved music and often produced emotional reactions in others with her beautiful singing voice. Among her many talents was an amazing ability to “chef”, to which her family, friends, and coworkers can all attest. Norma’s endless capacity to love led her to surround herself with pets, many of them rescues. Norma will be remembered for her unique zest for life, infectious laugh, quick wit, and her compassion for others.
Norma is survived by husband Stephen, children Diana, Arielle, Matthew, and Nathan, brother Glenn (Pam Cogan), nephews Daniel, Alex and Zachary as well as 9 beloved dogs and cats.
Norma is predeceased by her first husband Bernie.
Visitation will be held February 11, 2016 from 12:30 until 2:00 p.m. followed by a memorial celebration of Norma’s life in Chandlers’ Funeral Chapel, Liverpool, Nova Scotia. Reception to follow. Family flowers only, donations can be made to the Juvenile Diabetes Research Foundation. Online condolences may be made to www.chandlersfuneral.com.

Offer Condolence for the family of Strum; Norma Lynn