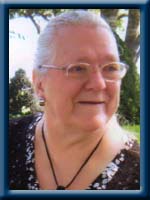 Born in Brookfield Mines, Queens county, she was a daughter of the late George and Nina (Nowe) Stewart.

Surviving are her sister Evelyn Herman of Maitland Bridge and her brother Max of Springfield as well as many nieces and nephews.

She was predeceased by her sister Erma Mailman and her brother Hugh.

Visitation will be Sunday, February 19th, 2012 from 6 until, 8 p.m. in Chandlers’ Funeral home, Liverpool. Funeral service will be Monday, February 20th, 2012 at 2:00 p.m. from Trinity United Church, Pleasant River. Reverend Doctor Doug Mailman officiating. Burial will be in Lakeview Cemetery, Pleasant River. Family flowers only, donations may be made to Lakeview Cemetery. Online condolences may be made to www.chandlersfuneral.com

Offer Condolence for the family of Stewart; Rhoda May