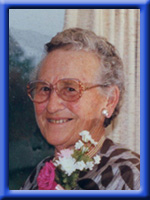 Born in Stanley Section, New Germany, she was a daughter of the late Clyde and Floy (Jefferson) Ritchie.

Katie was a veteran of World War II serving with the Canadian Women’s Army Corps as an M.P. Her training with the Canadian Provost Corps officers included judo, military law, map reading, security regulations and first aid and enabled her to become one of the most highly trained C.W.A.C. members in the country. Following the war, she worked in the woods hauling logs with horses and later she married her husband James “Randall” and devoted herself to her family while selling fish for many years after moving to Liverpool. She enjoyed singing and playing guitar and was a member of Harding Branch #144, Royal Canadian Legion, Western Shore.

She is survived by her daughter Darlene and granddaughters Leesha and Anita all of Western Shore; Son Eugene of Labelle.  Sister Ruth Joudrey of Upper Cornwall. Brother Ralph (Emily) of Stanley Section, New Germany.

She was predeceased by her husband James “Randall”,  son Stanley Wayne, Sister Verna Lowe and Brothers Lester and Ernest.

Visitation will be Thursday, January 20, 2011 from 1 until 2 p.m. and funeral service will be held at 2:00 p.m. along with a legion memorial service all in Chandlers’ Funeral Chapel, Liverpool. Reverend Andrew Shute officiating. Burial will be in Pine Rest Cemetery, Greenfield. Family flowers only, donations  may be made to Veteran’s Unit, Fisherman’s Memorial Hospital, Lunenburg.  Online condolences may be made to www.chandlersfuneral.com.

Offer Condolence for the family of Stewart; Katie Maxine