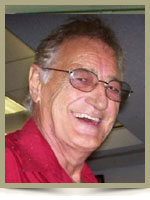 Born in Pictou, he was a son of Doris (Weaver) Stevens, of Liverpool and the late Fred Stevens.

Bobby was a fun loving free spirit. He loved spending time with his family and friends, especially outdoors enjoying a good BBQ. He spent most of his working years cooking and painting, both of which he enjoyed. Bobby loved the energy and joyfulness of the young and young at heart. He made many fond memories with friends and loved ones over the years.

He was predeceased by a sister Charlene and a brother Gordon.

A Celebration of Bobby’s Life will be held Wednesday, March 28th, 2012, at 2:00 p.m., from Chandlers’ Funeral Home, Liverpool. Reception to follow. Family flowers only, donations may be made to the Queens General Hospital Foundation. Online condolences to the family may be made at www.chandlersfuneral.com

Offer Condolence for the family of Stevens; Robert “Bobby” George