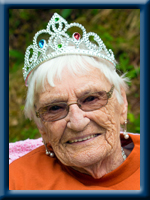 Born in 1912 Doris lived throughout the province of Nova Scotia, always making friends and becoming a member of the community regardless of where she was. An active member of local seniors groups, she was always looking forward to the next bus trip or event where she could socialize. Fondly known as Old Nanny Stevens, Doris loved the “young people” in her life and enjoyed seeing them at every opportunity.

Known for her love of life and vivacious spirit, Doris was always on the move. She enjoyed adventure, celebrating recent milestone birthdays with rides on Harley Davidson motor bikes and flying in a Cessna. On Friday nights she and Joe could be found at the Liverpool Legion dancing to Dave Burbine and Traditional Country. Her vast collection of frogs was a testament to the many lives she touched as almost every single one was given to her as a gift. From family members to people in the community, Doris received a frog figurine or ornament everywhere she went.

When asked how she lived to be 100 years old, Doris would simply say that she always had fun and kept moving. She would ask, “What’s the point in being miserable through this life? You might as well make the best of things.” And that she did, regardless of where she was or what she was doing, Doris made the most of her time here on earth.

The funeral will be officiated by Lt. Larry Campbell on Saturday, April 25th, 2015 at 2:00pm at the Salvation Army Church in Liverpool with a reception to follow at the Liverpool Legion. Donations can be made to the Queens General Hospital Foundation. Burial to take place at a later date. Online condolences may be sent to the family at: www.chandlersfuneral.com

Offer Condolence for the family of Stevens; Doris Bessie