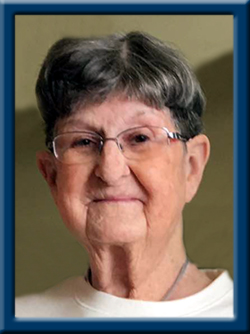 STAFFORD – Jean Rose, 85, of Brooklyn, Queens County, passed away peacefully in Queens General Hospital, Liverpool on Tuesday, September 6, 2016.
Born in Liverpool, she was a daughter of the late Walter Chemist and Blanche Croft.
Jean was a former CNA working at Queens General Hospital for over twenty years until her retirement. She was an active member of St. Gregory’s Catholic Church, Liverpool and a member of the Liverpool Firefighters Association Ladies Auxiliary. Jean will be lovingly remembered as being deeply devoted to her family especially her grandchildren, great grandchildren and her beloved dog, Cooper.
She is survived by her son Peter (Virginia) of Red Deer, AB; son in law Brian Silmarie of Brooklyn; grandchildren Stephanie (Corey) Tracy of Calgary, AB; Justin (Kelly) Stafford of Red Deer, AB; Jessie (Wayne) Hill of Dartmouth,; Julie Silmarie of Brooklyn and her beloved great grandchildren Olivia and Ethan Tracy, Narin and Lillian Stafford, Paishance, Wayne Jr., Jace and Kamden Hill.
She was predeceased by her husband Arnold, infant daughter Nancy, daughter Beverly Silmarie, infant son Robert and brother Gilbert.
Cremation has taken place under the direction of Chandlers’ Funeral Home, Liverpool, NS. At Jean’s request, a private family graveside memorial will be held at a later date in St. Gregory’s Catholic Cemetery, Liverpool. Father Charles Offor officiating. No flowers by request, donations may be made to the Mental Health Foundation. Online condolences may be made to www.chandlersfuneral.com

Offer Condolence for the family of Stafford; Jean Rose