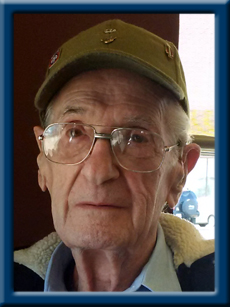 St. Clair-Golding – Anthony Louis, 96, of Labelle, Nova Scotia passed peacefully away on September 24, 2019 at South Shore Regional Hospital in Bridgewater, Nova Scotia.
Lou was a member of the 1st Special Service Force (Devil’s Brigade) and a World War 2 veteran of numerous campaigns during his military career before leaving with an Honorary Discharge.
He is survived by his son Derek Sr. and his wife Michelle of Paradise, Newfoundland and his grandson Derek Jr. of Toronto, On. and his son Kerry and his wife Suzanne of San Diego, California. Lou also leaves behind his good friends Eric and Sally McMillan  and Frank and Marianne Cameron of Labelle, N.S.
Lou is predeceased by his wife Janet on May 11, 2010.
As per Lou’s wishes cremation has taken place under the direction of Chandlers’ Funeral Home in Liverpool, N.S. A private family gathering will take place at a later date. No flowers by request. Online condolences may be made to www.chandlersfuneral.com.