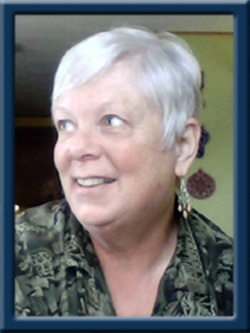 Born in Sherbrooke Village, Nova Scotia, Lynn was a daughter of the late Malcolm and Cynthia (Horton) Sponagle.

Lynn was a very accomplished lady, having worked first as a nurse and then joining the Canadian Military, where she tracked submarines for a number of years. She would later go back to school to become a lab technician, while studying she met Don, the love of her life, at CFB Stadacona. They lived in Milford Station for many years before retiring to Port Mouton, on the South Shore. Lynn knew how to express herself and interpret the world around her in her own creative way, there wasn’t any craft she couldn’t do such painting, carving, fibre art, cooking and many more once she put her mind to it. Lynn was an active member for many years with The Winds of Change Dramatic Society. She was a beautiful woman who gave endlessly of her time and love.

Cremation has taken place under the direction of Chandlers’ Funeral Home, Liverpool. At Lynn’s request, there will be no funeral service. No flowers by request. Donations may be made to a charity of your choice. Online condolences may be made to www.chandlersfuneral.com

Offer Condolence for the family of Sponagle; Lynn Marie