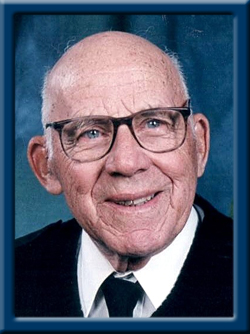 SPINKS – Roland Henry, 96, of Brooklyn, Queens County, passed away peacefully in Queens General Hospital, Liverpool on Friday, August 19, 2016.
Born in Brooklyn, he was a son of the late Willis and Hattie (Clark) Spinks.
Roland was a member of the Royal Canadian Army Provost Corps during World War II. He worked at Bowater Mersey Paper Company Limited in Brooklyn for over 25 years in the wood room and worked for a time as a commissionaire. He was a former member of the Canadian Papermakers Union. He was an active member of Brooklyn United Baptist Church serving as a deacon for over 50 years and as a Sunday School teacher and superintendent. He was a member of the local seniors group and helped found Meals on Wheels in the community.
He is survived by his daughter Nancy Spinks (Louis Kuffel) of Seattle WA., his son Mark (Yvon Mahe) of Edmonton, AB. His brother Leonard (Ruth) of Mesa, AZ. and a number of nieces and nephews.
Roland was predeceased by his wife Erma, his sisters Verta Silmarie and Wilda Nichols and his brothers Douglas, Eldon and Bill.
Cremation has taken place under the direction of Chandlers’ Funeral Home, Liverpool where funeral service will be held Friday, August 26, 2016 at 11:00 a.m.. Reverend Dr. Steven Hopper officiating. Reception to follow. Burial will be at a later time in Greenwood Cemetery, Woods Harbour. Family flowers only, donations may be made to Brooklyn United Baptist Church or to a charity of your choice. To share memories and condolences, please visit www.chandlersfuneral.com. Roland’s family wish to thank his niece Carol and Aubrey Fralic and friends Gail Tyson and Ron St. Germain for their care and support over the years.

Offer Condolence for the family of Spinks; Roland Henry