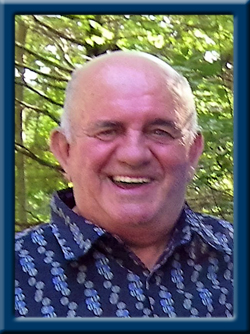 SPERRY – Vernon Cecil; 72, of Liverpool, passed away peacefully in Victoria General Hospital, Halifax on Sunday, June 26, 2016 with his family by his side.
Born in Liverpool, he was a son of the late Lorraine and Elizabeth “Betty” (Oickle) Sperry.
Vernon grew up in West Dublin and quickly became a man at 12 years old when he began his life at sea. After seeing three quarters of the world, he met his wife Ann in 1967. Together, with their two children, they lived in Blandford for a time where Vernon worked for Covey’s Auto Salvage. In 1979, they moved to Liverpool and Vernon began working first with Cole Ford, then with T&C Pontiac. He later went to work for the Town of Liverpool in the Works Department (Water). He was a volunteer fire fighter in Liverpool and Blanford and was a founding member of Queens EMO. He was also a member of the Liverpool Lions Club. Vernon was an avid outdoorsman who loved to hunt, fish and camp as well as enjoyed watching sports especially his grandchildren’s athletics. Everyone who knew him will fondly remember his humor, the meals he served and his dedication to hard work and his family. He will be missed by all who knew him and whose hearts he touched along the way.
He is survived by his wife of 47 years, Ann (Weagle); his daughter Aletha (Brian) James of Hunts Point; his son Dwayne (Terri-Lynn) of Liverpool; his grandchildren Kaitlin Scott (Kevin Wolfe), Carter Scott, Ethan Sperry and Oliver Sperry. 6 step grandchildren. His sisters Donna (Richard ) Bollivar of Liverpool, Helen Legge (Lexter Herrit) of Upper LaHave, His brothers Robert (Michelle) of Windsor, Harold (Jane) and Douglas (Robin), both of Liverpool, Richard (Yvonne) of Bridgewater, Jason (Tracy) of Timberlea. 4 nieces and 10 nephews.
He was predeceased by his nephews Nathan Sperry and Owen Sperry.
Cremation has taken place under the direction of Chandlers’ Funeral Home, Liverpool. At Vernon’s request, there will be no funeral service. No flowers by request, donations may be made to the Liverpool Salvation Army. Online condolences may be made to www.chandlerfuneral.com

Offer Condolence for the family of Sperry; Vernon Cecil