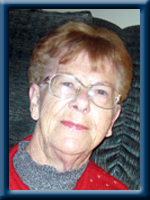 Born in Vogler’s Cove, Lunenburg County, NS, she was the daughter of the late Winford and Pauline “Polly” (Conrad) Conrad.

She was a loving wife, mother, grandmother and great grandmother. Harriet enjoyed playing cards, spending the summer camping with the grandchildren and family as well as attending any music concerts that her daughter was involved in. She was a member of Pinehurst Rebekah Lodge, St. Andrew’s Anglican Church, St. Andrew’s Altar Guild, the A.C.W. and a member of The Gloucester Senior Adults’ Centre, Ottawa.

Visitation will be Monday , September 8, 2014 from 7 until 9 p.m. in Chandlers’ Funeral Chapel, Liverpool. Funeral service will be Tuesday, September 9, 2014 at 10:00 a.m. in St. Andrew’s Anglican Church, Brooklyn. Reverend Judy Cross officiating. Burial will be in Seaside Cemetery, Brooklyn. In lieu of flowers, donations may be made to the Alzheimer’s Society of Nova Scotia, or the Heart and Stroke Foundation of Nova Scotia. Online condolences may be made to www.chandlersfuneral.com

Offer Condolence for the family of Snair; Harriet Miriam