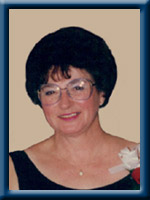 SMITH – Thelma Joan, 78, of Hunt’s Point, Queens County, passed away peacefully in North Queens Nursing Home, Caledonia on December 1st, 2011.
Born in Brooklyn, she was a daughter of the late William and Essie (Martin) Dexter.
Thelma was involved in many aspects of her community of Hunt’s Point. She worked for a time in the former Hunt’s Point Grocery, the local post office and worked alongside her husband Stan at the Seaside Takeout. She had a love for music and taught private music lessons and was music director for the church choirs and organist of Wesley United, Port Mouton United and Port Joli United Churches. Along with being church organist, Thelma was a member of the U.C.W. and was involved in the local Girl Guides Association. She was a member of the Liverpool Golf and Country Club and the Liverpool Curling Club. Thelma had many hobbies including, quilting, cooking, stained glass and painting.
She is survived by her daughter Stephanie (Bentley) Nickerson of Hunt’s Point; her sons: Michael (Elva) of Hunt’s Point and Paul (Mary Lou) of Dartmouth. Grandsons: Josh and Brandon. Her brother William of Philadelphia.
She was predeceased by her husband Stanley in 2009 and her sisters Ruth, Pearl and Mary.
Visitation will be Monday, December 5th, 2011 from 7 until 9 p.m. in Chandlers’ Funeral Chapel, Liverpool. Funeral service will be Tuesday, December 6th, 2011 at 11:00 a.m. from Wesley United Church, Hunt’s Point. Reverend Neil MacDonald officiating. A private family committal will be in Oceanside Cemetery, Hunt’s Point following a reception from the Hunt’s Point Community Hall. Family flowers only, donations may be made to the Alzheimer’s Society of Nova Scotia or the Queens General Hospital Foundation. Online condolences may be made to www.chandlersfuneral.com

Offer Condolence for the family of Smith; Thelma Joan