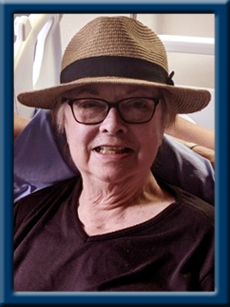 SMITH – Sheila Diane Mississauga, ON and Brooklyn, NS
It is with sadness that the family announces that Sheila Diane Smith, 77, of Mississauga, ON, formerly of Brooklyn, Queens County, NS, passed away suddenly on May 2, 2020 at Cooksville Care Centre, Mississauga, ON.
Born in Liverpool, NS, Sheila was a daughter of the late Leigh and Elaine Smith.
At the age of nineteen, Sheila moved to Toronto and later to Mississauga, On where she purchased a townhouse in 1994. Throughout her career, Sheila was employed as a legal secretary/assistant at several legal firms, but spent the greater part of her career with the Toronto Legal Department of Canadian Pacific which she managed from 1974 until the department was closed down in 1995, after which she held various temporary positions until her retirement. Sheila had a passion for travel, notably her epic trip to Australia and New Zealand. She enjoyed cooking, watching Coronation Street, sailing in her younger days, emailing her friends and family and spending time with her loving cats, lastly her beloved Iris. Sheila will be fondly remembered by her family and her friends for her quick wit and keen sense of humour.
Sheila is survived by her sister Betty Jean (Beverley) Colp of Beach Meadows, NS and her uncle St. Clair (Rosemary) Smith of Lunenburg, NS. Also several nieces, nephews and cousins.
Arrangements have been entrusted to Basic Funeral Home, Mississauga, ON and Chandlers’ Funeral Home, Liverpool. Due to the ongoing Covid-19 restrictions, a memorial service will be held at a later date in Mississauga, ON with a private family graveside burial in Seaside Cemetery, Brooklyn where Sheila will be laid to rest with her parents. Donations in Sheila’s memory may be made to Cooksville United Church, Mississauga, ON. Online condolences may be made to www.chandlersfuneral.com
Sheila’s family wishes to thank the staff at Cooksville Care Centre (second floor) for their care and compassion and express special thanks to Sheila’s dear friends Roger and Marie Steer and Sherley Pero who were an invaluable source of support and companionship throughout Sheila’s declining health.

Offer Condolence for the family of Smith; Sheila Diane