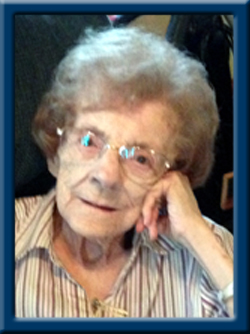 SMITH – Ruth Alfreda, 91, of South Brookfield, Queens County, passed away suddenly in Queens General Hospital, Liverpool on Thursday, March 3, 2016.
Born in Pleasant River, she was a daughter of the late Alfred and Blanche (Murley) Mosher.
` Ruth enjoyed going to her cabin and attending community suppers. She also enjoyed drives in the country, sightseeing and collecting antiques. She loved her dogs and, in her early years, played guitar and ukulele. At the age of 90, she learned how to use a computer and enjoyed playing solitaire.
She is survived by her daughter Jackie (Charles) Ferguson of Garden Lots; her son Walter (Joy Whynot) of Conquerall Mills, 7 grandchildren and 8 great grandchildren, and numerous great great grandchildren.
She was predeceased by her husband Ellsworth, her infant sister Marion, her sister Edith Fancy and her brothers Nelson and Walter.
Visitation will be Tuesday, March 8, 2016 from 7 until 9 p.m. in Chandlers’ Funeral Chapel, Liverpool and funeral service will be Wednesday, March 9, 2016 at 2:00 p.m. also in Chandlers’ Funeral Chapel, Liverpool. Reverend Vic Adams officiating. Burial will be in South Brookfield Community Cemetery. In lieu of flowers, donations may be made to Heart and Stroke Foundation, Nova Scotia Lung Association or to a charity of your choice. Online condolences may be made to www.chandlersfuneral.com

Offer Condolence for the family of Smith; Ruth Alfreda