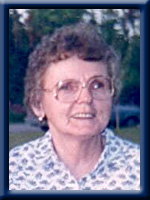 Born in Milton, she was a daughter of the late Frank and Vera (Wamboldt) Whynot.

Rosalie’s pride and joy was her family and she loved to spend as much time as possible with them. Over the years she worked as a housekeeper for a number of people. Rosalie enjoyed playing cards, bingo and being a part of the Liverpool Seniors group at the Liverpool Lions Hall.

Cremation has taken place under the direction of Chandlers’ Funeral Home, Liverpool. A Graveside Service will be held on Tuesday, August 17th, 2010, at 11:00 a.m., from the Milton Community Cemetery. Pastor Cory Pickens officiating. Family flowers only. Donations may be made to the Parkinson Society of Canada or to the Liverpool Seniors Club. Online condolences may be made at www.chandlersfuneral.com

Offer Condolence for the family of Smith; Rosalie Elaine