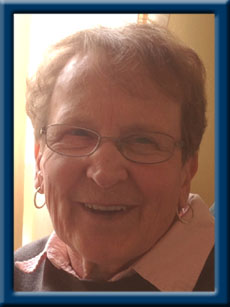 SMITH – Phyllis J., 82, of Hunt’s Point, Queens County, passed away peacefully on Monday, August 28, 2017 in Queens General Hospital, Liverpool.
Born in Brooklyn, Queens County, she was a daughter of the late George and Mabel (Frelick) Henderson.
Phyllis was a multi-talented, avid craftsperson who ran her own craft shop in Hunt’s Point for many years. She enjoyed family gatherings and time making crafts with her friends.
She is survived by her daughters Beverley (John) Armstrong of Western Head; Joanne (Donald) Uhlman of Brooklyn; Cheryl (Peter) Armstrong of St. Margaret’s Bay; her sons Alan (Coreen) of Cole Harbour and Blair (Michelle Dort-Smith) of Bedford. Her grandchildren Nicholas Uhlman (Ashley), Daniel Uhlman, and Sarah Uhlman; T.J. Armstrong (Michelle) and Zachery (Hanah) Armstrong, Tessa (Adam) Coombs, Elizabeth (Will) Carson and Mackenzie Armstrong (Ceilidhi). Great grandchildren Tamara and Jordan Uhlman. Her brothers Donald (Rosalyn), Howard (Joan) and Ronald (Bonnie) all of Brooklyn.
She was predeceased by her husband of 59 years C. Murray and her sister Mary Mouzar.
Funeral service will be held Friday, September 1, 2017 at 11:00 a.m. in Chandlers’ Funeral Chapel, Liverpool. Reverend Karen Ohrt officiating. Reception to follow. A private family burial will take place in Oceanside Cemetery, Hunt’s Point. Family flowers only, donations may be made to Canadian Cancer Society or the Queens General Hospital Foundation. Online condolences may be made to www.chandlersfuneral.com

Offer Condolence for the family of Smith; Phyllis Joan