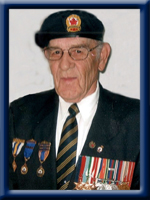 Smith, Murray St. Clair, 91, of Caledonia, Queens County, passed away peacefully on Sunday, May 29th, 2016, at North Queens Nursing Home, Caledonia.
Born in Harmony, he was a son of the late Pearle and Aurelia (Saltzman) Smith.
Murray was a Veteran of WWII, having served overseas with the Royal Canadian Artillery and the Royal Canadian Army Service Corps.. He served in the military for 26 years, and during his time he was proud to have started a post office in Alert, Canada’s most northern community in the Northwest Territories. Murray spent many years living in Ontario, running his own corner store in Richmond, before retiring and moving back home to Caledonia. He was Past President of the Royal Canadian Legion, A.L. Patterson Branch #87, Caledonia. Murray was a member of the Caledonia United Church where he sang in the choir for many years.
He is survived by daughters, Barbara, of Ottawa, Ontario, Janet (Gary) Driver, of Stittsville, Ontario, Carol (Ken) Shannon, of Orlando, Florida; sons, Bruce (Betty), William (Michael Lowe), both of Ottawa, Ontario, David (Jennifer), of Dartmouth; grandchildren Heather Watson, Robert Smith, Sara Hills, Jeffrey Smith, Jay Shannon, Kathleen Shannon, Heather Driver, Hannah Driver, Jackson Driver; great grandchildren William, Clare, Thomas and Bronwyn; brother, Kendall, of Collingwood, Ontario.
He was predeceased by his loving wife, Kathleen; sister, June Meisner; brothers, Walter and Kenneth.
Cremation has taken place under the direction of Chandlers’ Funeral Home, Liverpool. A Celebration of Murray’s life will be held on Wednesday, June 1st, 2016, from the Caledonia United Church, at 2:00 P.M.. Reverend Carol Smith officiating. Burial will be in Harmony Community Cemetery. Family flowers only. Donations may be made to the Caledonia United Church or to the North Queens Fire Department. Online condolence may be made to the family at www.chandlersfuneral.com

Offer Condolence for the family of Smith; Murray St. Clair