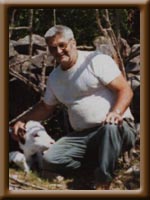 Born in Liverpool March 31, 1925, he was the son of the late Gilbert and Edith (Woodworth) Smith.

Lester was the last remaining member of his immediate family. He worked for C & R Railroad, Pepsi Cola Company and for Bowater Mersey Paper Company for 28 years. Lester loved camping, fishing,  animals and spending time with his family, all of whom he felt very close to. Lester enjoyed his gardens in the spring, which where complemented by many.

Offer Condolence for the family of Smith; Lester Ernest