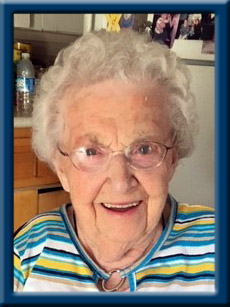 SMITH – Jean Rosamond, of Port Mouton, Queens County, passed away peacefully surrounded by her loving family at Queens General Hospital, Liverpool on Sunday, December 15, 2019 at the age of 96.
Born in Port Mouton, on June 29, 1923, Jean was the eldest daughter to loving parents Stanley and Vera (Wyatt) Stuart.
Jean was so special in our lives and was loved so much. Jean lived a life of dignity, strength and generosity who always saw the good in others, making many friends throughout her lifetime. Her sister Shirley doubled as her best friend always. She was a lifetime member of the Port mouton United Baptist church. She loved to watch Jeopardy, General Hospital, Blue Jays games and attending sewing circle. She participated in Loyalist Day celebrations. Favorite times were spent on her veranda with many friends and family including including live music during her birthday celebrations. She loved to knit, play card games such as “stupid’, Uno and Skipbo. She loved walking and even participated in Volksmarches in Germany. Her children and grandchildren were her pride and joy and she was so proud of each of them. Jean worked as a live-in nanny at the age of 17 and then joined the military during World War II through basic in Rockcliffe, ON. In 1947, leaving the Air Force, she was a proud veteran who instilled in her children and grandchildren that November 11th was to be celebrated with great respect and appreciation for all service members. She married her hometown sweetheart who was also in the air force and lived in CFB Shearwater, Chatham, Trenton, Goose Bay and Halifax. She worked at Eaton’s telephone order office in Halifax until retiring to Port Mouton in 1975.
Jean is survived by her daughter Janet (David) Spicer of Port Mouton. Her cherished grandchildren Trevor Smith Todd (Baaska) Smith, Melanie Spicer and Angie Spicer (Julien Provost-Guay). Adored great grandchildren Destiny, Abigail, Alex, Tony, Avery and Everly. Special daughter in law Mary Smith (Richard Roy) of Dartmouth. Many nieces, nephews and cousins.
Jean was predeceased by her husband Bruce, her son Bruce and her sister Shirley Kean.
Visitation will be Saturday, December 21, 2019 from 10:00 until 11:00 a.m. followed by funeral service at 11;00 a.m. both in Chandlers’ Funeral Chapel, Liverpool. Reverend Purley Tidd officiating. Reception to follow. Burial will be in Peaceful Hill Cemetery, Port Mouton. In lieu of flowers, donations may be made to Queens S.P.C.A., Queens Food Bank, Queens Branch VON or a charity of your choice. Online condolences may be made to www.chandlersfuneral.com
Thank you for calls, food and cards from mom’s many friends. A very special thank you to all the home support workers, Earth Angels and Veteran’s Affairs who enabled Jean to stay in her home until her final days. Thanks to staff and doctors at Queens General Hospital for their care and compassion and a special thank you to Dr. Blackadar.

Offer Condolence for the family of Smith; Jean Rosamond