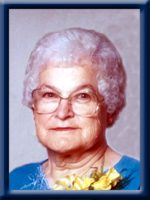 Born in Hunts Point she was the daughter of the late James Henry (Harry), and Laura Adeline (Leslie) Smith.

In 1940, she married Donald Franklin Smith, and they resided most of their married life in Hunts Point. She was an extremely active lady, both in her family and community. A prominent member of Wesley United and U.C.W in Hunts Point. A past Worthy Matron of Queens Chapter Order of Eastern Star, and presently of  Arbutus Chapter, Milton and a member of the Daughters of the Nile. Edna was a talented crafter and she displayed her wares at the Coastal Queens Craft Co-Op. Many people around the world continue to especially enjoy her quilts.

She was predeceased by her husband Donald in 1991. She was the last surviving member of her family, predeceased by siblings Carlton, Alton, Vera, Agatha, James, Everett, Margaret, Beulah, George A, and Aubrey.

Visitation at Chandler’s Funeral Home on Saturday November 23 from 7 to 9 pm.. Funeral service will be Sunday, November 24 at 2:00 p.m. in Wesley United Church, Hunts Point. Reverend Karen Ohrt officiating assisted by Reverend Neil MacDonald. Burial will be in Oceanside Cemetery, Hunts Point. Reception at Hunts Point Community Hall. Family flowers only. Memorial donations in her memory may be made to Queens General Hospital Foundation or Arbutus Chapter, Order of Eastern Star, Milton. Online condolences may be made to www.chandlersfuneral.com

Offer Condolence for the family of Smith; Edna Bernice