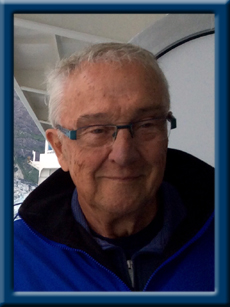 SMITH – Douglas “Murray”, 79, of Eagle Head, Queens County, passed away peacefully on December 28, 2017 in Queens General Hospital, surrounded by his loving family.
Born in Effingham, ON, Murray was the son of the late Roy and Marion (Fox) Smith.
Murray retired from public service after 35 years with Revenue Canada (CRA) in 1993. He was a proud supporter of the Liberal Party of Canada and a member of the White Point Golf Club, the Liverpool Curling Club and the Seaside Bridge Club. Murray loved to play board games and cards, enjoyed his vegetable garden and loved to travel, as well as “hang out at Tim Horton’s”. He will be lovingly remembered by his family and friends as having a very particular sense of humour.
Murray is survived by his wife of 40 years Rosalee (Dexter), his daughter Tammy Smith and her daughters Angelique and Julie Dagenais of Ottawa, ON, son Michael (Elaine) Smith of Nepean, ON and their son James (Krista) Smith of Whitby, ON; son Scott (Lesia) Smith and their daughter Fallon Smith of Cobourg, ON. His sister Phyllis Boddam of Welland, ON; mother-in-law Delphine Dexter of Brooklyn and brother-in-law Stephen (Patricia) Dexter of Brooklyn, his nephews Randall and Greg Boddam and Matthew and Graham Dexter and their families.
Other than his parents, Murray was predeceased by his father-in-law Atwood Dexter and his brother-in-law Donald Boddam.
Cremation has taken place under the direction of Chandlers’ Funeral Home, Liverpool. Visitation will be held Friday January 19, 2018 from 7 until 9 p.m. and funeral service will be held Saturday, January 20, 2018 at 11:00 a.m., both in Chandlers’ Funeral Chapel, Liverpool. Reverend Dr. Steven Hopper officiating. Reception to follow. A private family interment will take place at a later date. Family flowers only, donations may be made to the Canadian Cancer Society, the Brooklyn Baptist Church or a charity of your choice. Online condolences may be made to www.chandlersfuneral.com.
Murray’s family would like to extend their heartfelt thanks for the wonderful care he received while in QEII Infirmary 7.3, South Shore Regional Hospital and Queens General Hospital.

Offer Condolence for the family of Smith; Douglas “Murray”