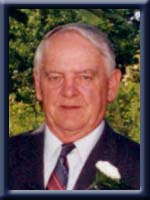 Born in Beech Hill, Queens County, he was a son of the late Clifford and Myra (Frellick) Smith.

In his earlier years Murray worked for Maritime Telegraph and Telephone. He was a member of Wesley United Church, Hunts Point, singing in the church choir for a number of years and volunteering in various church and community groups. Murray received the Builders Award from Baseball Nova Scotia in recognition of over 40  years of volunteer service in baseball. Murray had a passion for nature and spent many hours fishing, hunting and working in his wood lots.

He was predeceased by brothers Donald and Stanley and sisters Ada Fanjoy and Mildred Smith.

There will be no visitation. Funeral service will be held at Chandlers’ Funeral Chapel, Liverpool on Thursday, May 3rd, 2012 at 11:00 a.m.. Reverend Neil MacDonald officiating. A private burial will be held in Oceanside Cemetery, Hunts Point.  Family flowers only. Donations may be made to Wesley United Church or the Canadian Cancer Society. Online condolences may be sent to www.chandlersfuneral.com

Offer Condolence for the family of Smith; Clifford Murray