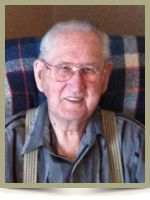 SMITH – Claude Parker,  91, of Liverpool, formerly of Hunt’s Point, passed away peacefully in Queens General Hospital, Liverpool, Tuesday, November 9th, 2010 with family by his side.

Born in East Port l’Herbert, he was a son of the late Arthur and Hilda (Leslie) Smith.

Claude was a  fisherman in his early years, a door to door salesman for a number of years as well as a new and used car salesman for 5 years first with L.L. Bain, then Liverpool Chrysler Dodge and later with T.& C. Pontiac Buick Ltd. for 25 years. He was a former school bus driver and in his spare time, enjoyed hunting and fishing. He was an avid music fan and enjoyed many types of music. In his early years he played harmonica and accordion  and later, during his retirement, he played guitar and organ for his own entertainment as well as church groups and others. He was also a founding member of the Fishermen Men’s Choir. He was a member of the Port Joli United Church and later Wesley United Church, Hunt’s Point. He was a member of  the church Session and served as Clerk for three five year terms. He also served on the South Shore Presbytery of the United Church of Canada for 20 years.

He was predeceased by his first wife Alma (MacDonald) and his sister Viola MacDonald.

Funeral service will be Saturday, November 13th, 2010 at 11:00 a.m. in Chandlers’ Funeral Chapel, Liverpool. Reverend Bethe Benjamin-Cameron officiating assisted by Reverend Neil MacDonald. Burial will be at a later date following cremation. No flowers by request, donations may be made to the Nova Scotia Heart and Stroke Foundation or the Wesley United Church, Hunt’s Point. Online condolences may be  made to www.chandlersfuneral.com

Offer Condolence for the family of Smith; Claude Parker