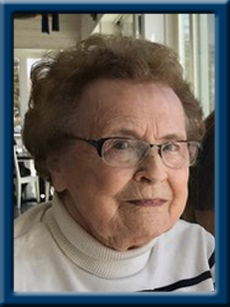 It is with great sadness that the Smith family announces the passing of Beulah Sophia Smith of Hunts Point, Queens County on December 5th, 2020 in Queens General Hospital, Liverpool. Mom was 101 and since 2016 she lived, first at Stonehaven Lodge, Port Mouton and the last year at Ridgewood Assisted Living, Bridgewater, Nova Scotia.
Born at home in Pleasant River, Queens County on August 28th, 1919. She was the second daughter of Ralph Lee and Eva Sarah (Meisner) Waterman. Mom attended the Normal College in Truro and taught school in Queens County for thirty-eight years in the communities of White Point, Hunts Point, and North Port Mouton ending her career in 1984 after 24 years teaching mainly Primary at the Port Mouton Consolidated School. She touched many lives and was reminded of this on a regular basis by her former students. Mom would reminisce on how she enjoyed working with younger minds. Throughout her life Mom was about hard work, kindness and taking care of others. She was active in the community volunteering in church groups, The United Church of Canada; and community groups, Hunts Point Hall, Oceanside Cemetery, and West Queens Coastal Community Development Association, “ Coastal Queens”, Port Mouton and others. In recognition of her community service at the age of 94 mom was the recipient of the Queen Elizabeth Diamond Jubilee Medal, she volunteered at a National Curling event at the age of 96.
Mom cherished time spent with family, in her later years she especially enjoyed tending great grandchildren in times of need. They always had fun with” Great Gram”. An avid curler, she was a founding member of the women’s curling club in Liverpool and was an honorary member of the Liverpool Curling Club at the time of her death. She had many talents and hobbies, such as gardening, painting, quilting and knitting. Besides her parents, she was predeceased by her husband of 51 years George Alfred “Affie” Smith, her sister Eileen Himmelman, brothers Louis and Rodger Waterman and close friend, sister-in-law Edna Smith. She is survived by her two sons, Ralph Glendon, Gatineau, Quebec and Jim (Adele) Pine Grove, Lunenburg County; four grandchildren, Darwin Smith Bedford, Halifax County, Lynn (Danny) Nowe, Dayspring Lunenburg Co.; Amanda Smith(Shawn Wells) Bedford, Halifax County; Tyler (Maria Consiglio) Smith Oshawa Ontario; 7 great grandchildren; Kelsey-Lynn Nowe (Ashton Stephenson), Bedford; Ryan Nowe, Dayspring; Colton Smith, Oromocto New Brunswick; Skyler and Jack Wells, Bedford; James and Lily Smith Oshawa; one great great grandson Ellis Gus Stephenson, Bedford. A debt of utmost gratitude is owed to Deborah and Alexander Doggett who have lent their love, support and care over the past few years. Cremation has taken place under the direction of Chandlers’ Funeral Home, Liverpool, Queens County. Burial will take place in Oceanside Cemetery, Hunts Point. A funeral service to celebrate Mom’s life will be held at a later date in the Wesley United Church of Canada, Hunts Point. Reverend Karen Ohrt officiating. No flowers by request. Donations may be made to the Wesley United Church, Hunts Point or a charity of your choice. To share memories and condolences, please visit www.chandlersfuneral.com

Offer Condolence for the family of Smith; Beulah Sophia