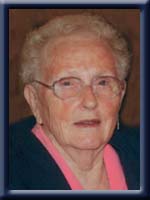 Born in Liverpool, she was a daughter of the late Benjamin Cunningham and Louise MacDonald.

Betty worked for Standard Brands at the Best Yeast plant in Brooklyn and was a receptionist for Dr. Lloyd MacLeod. She worked at Queens Manor for a number of years until her retirement. She was a member of Zion United Church and the U.C.W. for many years as well as the Liverpool Firefighters Association Ladies Auxiliary and the Ladies Auxiliary of the Royal Canadian Legion  Mersey Branch #38. She enjoyed watching curling, playing darts and bowling with the seniors league.

Offer Condolence for the family of Smart; Elizabeth Jane “Betty”