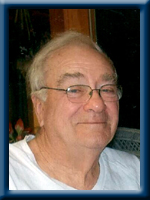 Born in Ashley, PA, he was a son of Ellen M. (Hughes) Skatuler and the late Michael J. Skatuler Jr..

Michael graduated from St. Leo’s Parochial School and , after being a window trimmer for a large department store in Wilkes-Barre for a few years, he and a partner decided to open a Gulf Service Station which he operated for thirty years. Upon retiring, he became a crew chief for a National Hot Rod Association company which won three national records. To this day, people in the racing circles know Mickey Skatuler’s name. He was a master craftsman and built exceptional pieces of furniture. In 2003, he moved to Florida and in 2012, Michael became a permanent resident of Canada and made Nova Scotia his home.

Surviving besides his mother is his spouse Heather.

Cremation has taken place under the direction of Chandlers’ Funeral Home, Liverpool. A private family graveside memorial service will be held at a later date. Online condolences may be made to www.chandlersfuneral.com

Offer Condolence for the family of Skatuler; Michael Joseph III