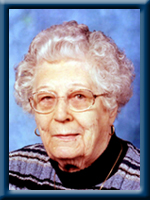 Born in Milton, Queens County, she was a daughter of the late Edwin and Sophie (Fraelic) Hartlen.

Amy was a former sales clerk with Simpsons in Toronto and worked in various other capacities within the company. She was a member of St. Andrew’s Anglican Church, Brooklyn, the church choir and the ACW. She was an avid gardener, loved to knit and embroider as well as socialize. She had a fondness for animals, especially dogs.

She is survived by her sister Dorothy Freeman of Milton and several nieces and nephews.

She was predeceased by her husband Norman, her sisters Jean, Gladys, Jessie, Roxie and Marguerite, her brothers Robert, Harry, Clair, Rex and Reginald.

Visitation will be Monday, September 29, 2014 from 7 until 9 p.m. in Chandlers’ Funeral Home, Liverpool. Funeral service will be Tuesday, September 30, 2014 at 11:00 a.m. in St. Andrew’s Anglican Church, Brooklyn. Reverend Judy Cross officiating. Burial will be at a later date following cremation. Family flowers only, donations may be made to St. Andrew’s Anglican Church or to any charity. Online condolences may be made to www.chandlersfuneral.com.

Offer Condolence for the family of Simpson; Amy Irene Syvilla