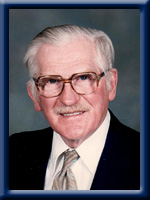 SIBLEY – George E, passed away peacefully in Queens General Hospital, Liverpool on Sunday, April 18th, 2010 at the age of 93.

Born in Chaswood, NS, he was a son of the late George Stephen and Ellen Jane (Sargent) Sibley.

George enjoyed a happy childhood growing up with his parents and eleven brothers and sisters on their farm in Chaswood. During the war years, he joined the RCMP which led to a long and successful career with the force retiring as staff sergeant in 1969. He was stationed in Ottawa for most of his working years, where he and Peggy brought up their three children. They returned to his beloved Nova Scotia after his retirement and settled in Beach Meadows where he kept a large garden and was active in the church and community. He was a very strong man, honest, stable and dependable. We thank God that he was blessed in so many ways with a long and healthy life.

He is survived by his daughters: Margaret of Beach Meadows, Kathy (Francois) Pilon of Dartmouth and his son Larry of Musquodobit  Harbour. His grandchildren Eric and Sara Pilon and Arial and Gabriel Sibley. His sisters Dora Kinsmen of Welland, ON. and Gladys Kerr of Meaghers Grant. His brother Norman (Marilyn) of Beach Meadows.

Visitation will be Tuesday evening from 7 until 9 p.m. in Chandlers’ Funeral Home, Liverpool. Funeral service will be held Wednesday, April 21st, 2010 at 2:00 p.m. in Emmanuel United Church, Beach Meadows. Lay Minister Peter Anthony officiating. Burial will be in Beach Meadows Cemetery. Family flowers only, donations may be made to the charity of choice. Online condolences may be made to www.chandlersfuneral.com

Offer Condolence for the family of Sibley, George Edward