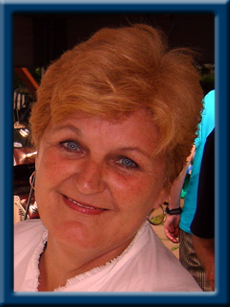 Sheila May Shaw (MacAskill), 1950-2020
“How lucky I am to have something that makes saying goodbye so hard.” A.A Milne
It is with considerable sadness that we announce the passing of our dear Mom Sheila May Shaw (MacAskill), recently of Liverpool, formerly of Cape Breton. Sheila passed away peacefully Saturday, March 21st at Queens General Hospital with family by her side after a long illness.
One of seven children, Sheila was born in Sydney to John and Dorothy (Chislette) MacAskill. At a young age, she married into the Mac Innes family, had two daughters and settled in Jersey Cove, where she was a devoted parent and a very active community member. Sheila loved life and enjoyed gardening, bingo, darts, cards and Coronation Street. With a spirited laugh, great sense of humour and the most striking blue eyes, she was an affectionate mother, and the absolute proudest grandmother.
Sheila had many jobs over the years, but was particularly fond of her role as a Personal Care Assistant for Christine MacAskill, a position for which she was naturally suited and bestowed upon her a considerable sense of fulfillment and esteem.
Sheila was predeceased by Abraham (Abie) Shaw, (her second husband and the love of her life), as well as her mother, father and two brothers Stewart and John.
She is survived by daughter Sylvia MacInnes (Aaron Spaulding) of Sherwood Park, AB; Sonya Eddy (Gerard) of Liverpool, NS; step daughter Jillian Shaw Keigan of Edmonton; sisters Ann Mac Innes of Jersey Cove, CB; Liz Dauphney (Ross) of Little River, CB; brothers Daniel Mac Askill (Freda) of Edwardsville, CB; Robert Mac Askill (Judy) of Westmount, CB; many wonderful nieces and nephews, her very special Aunt Normie, Aunt Caddie; and the Shaw family to whom she always remained close. Finally, ‘Nanny Shaw” leaves behind her grandchildren Ella and Calum Eddy, both of whom held such an exceptional place in her heart.
Cremation has taken place under the direction of Chandlers’ Funeral Home, Liverpool. Online condolences may be made to www.chandlersfuneral.com. A celebration of her life will be held in Cape Breton at a later date. We would like to thank Dr. Norah Mogan for her superior and kindhearted care as well as her many home visits. Thanks also to the many CCA’s with Queens Home Support who provided excellent care. Donations may be made in her memory to The Heart and Stroke Foundation of Canada or The Lung Association of Nova Scotia.

Offer Condolence for the family of Shaw; Sheila May