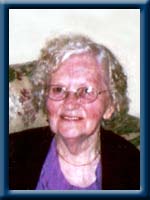 Born in Liverpool, February 20th, 1916, she was a daughter of the late Herbert and Sarah (Roy) Farmer.

Edith enjoyed spending time with her many family and friends. She loved the outdoors; hunting, fishing, gardening, camping and entertaining at her trailer on Tupper Lake. She was well known in her community and was loved and respected by all who knew her. She will be sadly missed. Edith was the last surviving member of her immediate family.

A graveside service will be held Tuesday, February 19th, 2013 at 2:00 p.m. in Zion United Cemetery, Payzant Street, Liverpool. Reverend Wade Harvey officiating. Family flowers only, donations may be made to Palliative Care Unit, North Queens Nursing Home, Caledonia or to any charity. Online condolences may be made to www.chandlersfuneral.com

Offer Condolence for the family of Seamone; Edith Cavel