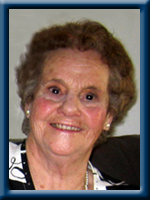 Born in Charleston, Queens County, she was a daughter of the late Boardman and Frances (Anthony) Shupe.

Known for her cooking and knitting, Alene continued to volunteer with functions in Charleston as long as she was able and produced many pairs of mittens for the Queens General Hospital Hustle. She operated a small restaurant in Sandy Cove in her younger days and was an employee of Queens Manor for a number of years.

She was predeceased by her sister Phyllis Anthony and brothers Earl and Eugene.

Cremation has taken place under the direction of Chandlers’ Funeral Home, Liverpool, where a memorial service will be held Monday, February 3, 2014 at 11:00 a.m. Reverend Sheila Redden-Smith officiating. A private family interment will take place at a later date. Family flowers only, donations may be made to the Queens General Hospital Foundation or the New Charleston Cemetery Association c/o Margo Zwicker R.R.#1, Mill Village, NS B0J2H0. Online condolences may be made to www.chandlersfuneral.com

Offer Condolence for the family of Seaman; Alene Shupe