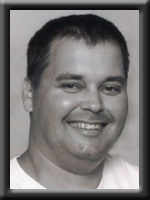 Born in Liverpool he was a son of  Arthur (June) Scott of Sable River and  the late Hilda  (Skinner) Scott.

His father introduced him to the water right after high school. He advanced from deckhand to mate then onto 4th class engineer. He worked for Clearwater, Mersey Seafoods and then OCI International (NL). Family meant everything to him especially his children, Kaitlin and Carter.  He enjoyed simple things in life; playing darts, volleyball, golf and baseball. He enjoyed model vessels, watching hockey and playing X-box with his children.

He is survived by his daughter Kaitlin, his son Carter, both of Hunt’s Point, his sisters Claudine (Robert) Martin of Lower Branch, Tammy (Tim) Delaney of Mersey Point, Bonnetta (Bernie) Allison of Port Mouton, Claudette Scott of Liverpool as well as many aunts, uncles, nieces and nephews.

Funeral arrangements are under the direction of Chandlers’ Funeral Home, Liverpool. Online condolences may be made to www.chandlersfuneral.com “There are no words to describe our loss. He will truly be missed and always in our hearts.”

Offer Condolence for the family of Scott; Arthur Roger Allan