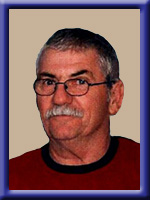 Born in Liverpool, he was a son of  Ruby (Gardner) Scobey of Sandy Cove and the late Maurice Scobey.

Joe was a truck driver for Armour Transport for 25 years. He also drove for Thompson’s Transport and T.R.A.

He is survived by his wife Marilyn ( Freeman ). His daughter Michelle ( Dwayne Weagle) of Mersey Point. His son William Joseph Jr. “Joey” (Jeanette Soriano) of Coquitlam, BC. A granddaughter Jaden. Sisters Queenie (Philip) Irwin of Brooklyn and Nancy (Willard) Moulton of Liverpool. Brothers Fred of Halifax and Maurice Jr. of LaHave Manor, Bridgewater.

He was predeceased by a granddaughter Kayla.

Visitation will be Wednesday, August 11, 2010 from 7 until 9 p.m. and funeral service will be Thursday, August 12, 2010 at 11:00 a.m. both in Chandlers’ Funeral Home, Liverpool. Reverend Judy Cross officiating. Burial will be in Zion United Cemetery, Payzant Street, Liverpool. Family flowers only. Donations may be made to Canadian Cancer Society. Online condolences may be made to www.chandlersfuneral.com

Offer Condolence for the family of Scobey; William Joseph “Joe”