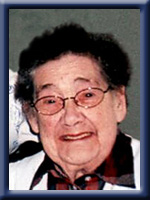 It is with great sadness that we announce the passing of our loving mother, grandmother, great grandmother and great great grandmother, Thelma Viola Scobey, on Tuesday, August 2nd, 2011 in Queens Manor, Liverpool at the age of 92 years.
Born April 22nd, 1919, in Liverpool, she was a daughter of the late William and Sarah (Wolfe) Naugler.
Thelma was a life member of the Ladies Auxiliary Mersey branch #38, Royal Canadian Legion, Liverpool and long time member of the Queens Manor Auxiliary and did pastoral care with the residents. She was an active member of the former Grace Anglican Church, Western Head and president of the ACW. She enjoyed crocheting, sewing, gardening handcrafts as well as cooking and baking. She will be fondly remembered as an outgoing, loving person who was hard working , very generous; always willing to help anyone in need. She was loved by all who knew her and will be greatly missed.
She is survived by her daughter Virginia (Clifford “Bob”) Sanford of Liverpool; her son Reginald (Phyllis) Coolen of Mersey Point. Several grandchildren, great grandchildren and great great grandchildren. A step son William (Barbara) Scobey of Mersey Point.
She was predeceased by her husband Edgar, son Gregory, step son Charles Scobey, sister Josephine and her husband Arthur Tarr, brothers Clarence and his wife Marion and Gordon and his wife Gladys.
Visitation will be Thursday, August 4th, 2011 from 7 until 9 p.m. in Chandlers’ Funeral Home, Liverpool. Funeral Service will be held Friday, August 5th, 2011 at 11:00 a.m. from Trinity Anglican Church, Liverpool. Reverend Judy Cross officiating. Burial will be in Zion United Cemetery, Payzant Street, Liverpool. Family flowers only, donations may be made to Queens Manor, Queens General Hospital Foundation or to any charity. Online condolences may be made to www.chandlersfuneral.com

Offer Condolence for the family of Scobey; Thelma Viola