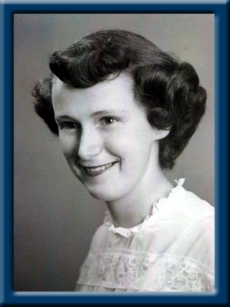 SCOBEY – Pamela M., 88, of Liverpool, Queens County passed away peacefully on March 4th, 2021 in Queens General Hospital, Liverpool.
Born in Lethbridge, AB, Pam was a daughter of the late David and Juanita (Nelson) Mathieson.
Pam served with the Royal Canadian Air Force as a tele-type operator from 1953 until 1955 overseas in Zweibrucken, Germany. Following her military career, Pam married Jim Scobey and together raised their family all the while being posted throughout Canada including Ontario, British Columbia, PEI and Nova Scotia where they retired and moved to Eagle Head to buy and renovate their home. Pam was active in arts and crafts having served as president of the Liverpool Arts and Crafts Council. She especially enjoyed quilting.
Surviving are her husband of 67 years, Jim; her daughter Debbie (David) Noel of Liverpool; her granddaughter Shannon (Derek) Belcourt; her great grandson Noah; her sister Janice Casselman of Salmon Arm, BC; her brother Nelson (Lois) of Nanaimo, BC.
Besides her parents, Pam was predeceased by her son James David “Dave”.
Cremation has taken place under the direction of Chandlers’ Funeral Home, Liverpool. At Pam’s request, there will be no funeral service at this time. No flowers, donations may be made to Victorian Order of Nurses, Queens County Branch, Queens General Hospital Foundation or to the Canadian Diabetes Association. Online condolences may be made to www.chandlersfuneral.com

Offer Condolence for the family of Scobey; Pamela Mary