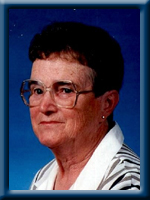 Schrader – Ruby Virginia 84, of Bridgewater, passed away peacefully on Sunday, March 29, 2015 at South Shore Regional Hospital.
Born in Liverpool, she was a daughter of the late Edward and Florence (Oickle) Rafuse.
Ruby worked for the former Butler’s Shoe Store in Liverpool as well as Stedman’s Department Store, the bowling alley and IGA Meat Department. Her last employment was as a personal care worker with Hillsview Acres in Middlefield.
She is survived by her sons Patrick (Patricia) of Milton and Barry (Karen) of Bridgewater, many grandchildren and great-grandchildren, her sister Mollie (Bill) Dauphinee of Liverpool, her brothers Stephen (Lynn) of Western Head and Paul (Lynn) of Kitchener, ON.
She was predeceased by her husband Albert, sister Opal Giffin, brothers Rufus, William, Murray and infant Winfred.
Cremation has taken place under the direction of Chandlers’ Funeral Home, Liverpool. At Ruby’s request, a private family service will be held at a later date. No flowers by request, donations may be made to the charity of choice. Online condolences may be made at www.chandlersfuneral.com

Offer Condolence for the family of Schrader; Ruby Virginia