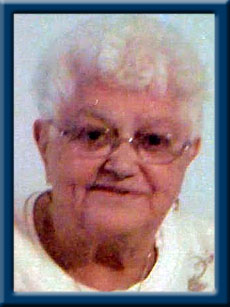 SCHRADER – Jessie Mae, 87, of Liverpool, went home to be with the Lord on October 16, 2017 at Queens General Hospital, Liverpool.
Born in Liverpool, she was a daughter of the late Stanley and Bessie (Whynot) Oickle.
She was a long time member of the Liverpool Wesleyan Church and the Salvation Army. She enjoyed Seniors Group and going out with the ladies.
She is survived by her daughter Sheila Jane (Harold) Sperry of Liverpool, sons Bernie (Vicky) and Fulton, both of Liverpool. Her granddaughter Hillary of Liverpool. Sister Ethel Wamboldt of Head of Chezzetcook.
She was predeceased by her husband Raymond, grandson Nathan, sisters Gladys, Betty, Dottie, brothers Alex, Herbie and Billy.
Visitation will be Wednesday, October 18, 2017 from 7 until 9 p.m. in Chandlers’ Funeral Chapel, Liverpool Funeral service will be Thursday, October 19, 2017 at 2:00 p.m. at the Salvation Army Citadel, Liverpool. Captain Dennis Maybury officiating. Burial will be in Zion United Cemetery, Payzant Street, Liverpool. Family flowers only, donations may be made to Salvation Army, Liverpool. Online condolences may be made to www.chandlersfuneral.com

Offer Condolence for the family of Schrader; Jessie Mae