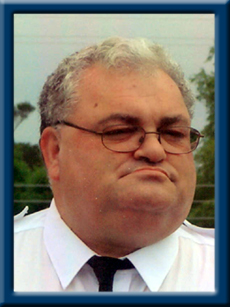 SCHRADER – Bernard R., 65, of Liverpool went home to be with the Lord on Tuesday, December 22, 2020.
Born in Liverpool, Bernie was a son of the late Raymond and Jessie (Oickle) Schrader.
Bernie was a fish cutter for Mersey Seafoods, Liverpool for 25 years.. He was a member of the Salvation Army Liverpool for 30 years and volunteered with the Salvation Army Thrift Store for 14 years. Bernie enjoyed playing the guitar, watching wrestling and old westerns and loved collecting Christmas nutcrackers and eagles.
Bernie is survived by his wife Victoria “Vicky” (Whynot); his daughter Hillary Steadman (David Benedict) of Milton; his sister Sheila Jane (Harold) Sperry of Liverpool and his brother Fulton of Liverpool.
Besides his parents, Bernie was predeceased by his nephew Nathan Sperry.
Cremation has taken place under the direction of Chandlers’ Funeral Home, Liverpool, NS. A private family service will be held at a later date. Burial will be in Zion United Cemetery, Liverpool. No flowers, donations may be made to the Liverpool Salvation Army. Online condolences may be made to www.chandlersfuneral.com
Special thanks to all the medical doctors, nurses and staff and the Liverpool Dialysis Unit at Queens General for their excellent care of Bernie for the past 11 and a half years.

Offer Condolence for the family of Schrader; Bernard Raymond