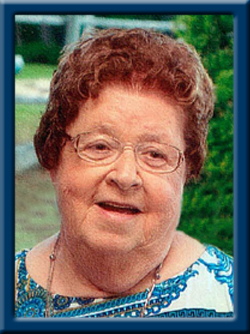 SCHNARE – Goldie Princetta, 76, of Charleston, Queens County, passed away peacefully in Queens General Hospital, Liverpool on Tuesday, August 25, 2015.
Born in Charleston, she was a daughter of the late Lee and Phyllis (Shupe) Anthony.
Goldie attended the School for the Blind in Halifax for eleven years and hated it all, but came away with fond memories and friends to this day. She met her husband Bill as kids and together they built their home that they still live in nearly 54 years later. She was one of the founding members of the Charleston Fire Department Auxiliary. She knit everything you could imagine including 150 dishcloths for her grandson Matt and Nichole’s wedding. She was a member of the Charleston United Baptist Church where she taught Sunday school and served as church organist for over 40 years. She helped Bill build their cabin on Ponhook Lake where they enjoyed 25 years. When Bill retired, they bought an RV and attended many Bluegrass festivals around Nova Scotia and PEI and enjoyed taking trips with family. They also made three trips to Newfoundland and took a bus tour to Nashville. Goldie loved to shop but mostly she loved her family and enjoyed having family around.
She is survived by her husband William “Bill”; her daughter Brenda (David) Plummer of Danesville; grandchildren Matthew (Nichole) Plummer of Danesville, Justin (Caitlin) Plummer of Chester and Nicholas Plummer (Rebecca Mathison) of Red Deer AB., her sister Margo Zwicker of Charleston and her brother Merrill (Frances) of Charleston. Sisters-in-law Betty (Donald) Parks of Northwest Bay, Maxine (Tony) Rafuse of Charleston. Many nieces and nephews.
There will be no visitation. Funeral service will be Friday, August 28, 2015 at 10:00 a.m. in Chandlers’ Funeral Chapel, Liverpool. Reverend Doug Porter officiating. A private family burial will take place at a later time in New Charleston Cemetery. Family flowers only, donations may be made to a charity of your choice. Online condolences may be made to www.chandlersfuneral.com

Offer Condolence for the family of Schnare; Goldie Princetta