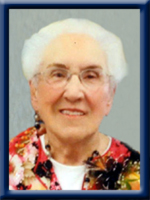 Born in Hubbards Point, Yarmouth County, she was a daughter of the late Alfred and Aimee (Hubbard) Muise.

She and her husband Vince, moved to Liverpool over 50 years ago and she considered this home. Florence enjoyed good health into her nineties and frequently sported about with good friends, Betty and Margaret. In 2012, she moved to Queens Manor and the wonderful staff there involved her in all the activities.

She is survived by her daughters Jean Blades, Lynn (Stephen) Rafuse and Dale Saulnier (Blaine Whynot), all of Liverpool, her sons Roy (Sharon) of Liverpool and Gary (Brad (Gough) of Vancouver. Her sister Emma Bourque and her brother Charlie Muise, both of Tusket. Also many grandchildren and great grandchildren scattered coast to coast.

She was predeceased by husband Vincent in 1991, daughter Joan in infancy, grandson Niki, brothers Clifford, Julien, Toussaint, Elien, Steve and Fred and her sister Jeanette.

“…and I shall dwell in the house of the Lord forever”

Offer Condolence for the family of Saulnier; Florence Anne