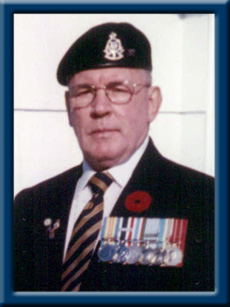 SANFORD – Clifford Leroy “Bob”, 89, of Liverpool, Queens County, passed away peacefully on April 19, 2022 in Queens General Hospital, Liverpool after a brief illness.
Born in Halifax, he was a son of the late Clifford and Ethel (Vail) Sanford.
Bob joined the Canadian Armed Forces in 1949 serving with the Royal Canadian Ordnance Corps until 1969. During that time, he served in Vancouver, with NATO forces in Germany attached with the British Army, Korea during the Korean Conflict, with the United Nations Emergency Force in Egypt and continued serving in bases across Canada, his last posting being in CFB Gagetown, NB.
Upon his retirement from the Forces, Bob was employed at K.& W. Enterprises Ltd. in Liverpool, Steel and Engine Products Ltd. (STENPRO), Liverpool and with Bowater Mersey Paper Company LTD , Brooklyn in the accounting department retiring in 1995.
Bob was a very people person and, over the years, belonged to the Mersey Branch #38, Royal Canadian Legion, Liverpool for 50 years, The Winds of Change Theatre Group, Hank Snow Society, Lions Club, Barbershop Chorus and was very proud to be the Town Crier for the Town of Liverpool and County of Queens for several years. Bob also volunteered at Queens Manor for many years and loved playing guitar and singing to the residents and staff. He will be thoroughly missed by the entire community especially with his “coin tricks” and jokes.
Bob is survived by his wife of 60 years Virginia (Coolen) and, during that time, they raised three wonderful children. David (Laura) of Slave Lake, AB; Susan of Ottawa, ON and Roberta (Bruce) Stewart of Truro. He is also survived by three grandsons and three great grandchildren, his sister Muriel (Wallace) Matthews, brother Walter (Sharon), step sister Joan, step brother Fulton, brother in law Reginald (Phyllis) Coolen and many nieces and nephews.
Besides his parents, Bob was predeceased by his brothers Owen and Kenneth.
Cremation has taken place under the direction of Chandlers’ Funeral Home, Liverpool. A memorial service will be held Sunday, April 24, 2022 at 2:00 p.m. in Chandlers’ Funeral Chapel, Liverpool with a reception to follow. A private family burial will take place at a later time. No flowers by request, donations may be made to Queens Manor, Liverpool or to Queens General hospital Foundation. Online condolences may be made to www.chandlersfuneral.com.
Live streaming of Bob’s service will be available at service time. Click the link above.

Offer Condolence for the family of Sanford; Clifford Leroy “Bob”