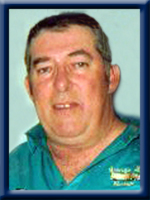 Born in Southwest Port Mouton, he was a son of the late Floyd J. and Edna (Fisher) Roy.

Reid was a fisherman all his life. When he wasn’t on the water, he enjoyed camping, horseshoes, of which he and his father won many trophies. Reid enjoyed the Blue Jays and the Maple Leafs even when they were losing and went to Toronto with Mike and Robert to see his beloved Blue Jays play. Although he and Janie had no children of their own, their home and yard always had kids in it. He enjoyed his time volunteering at the West Queens Recreation Center catering and doing anything and everything the ladies asked. He enjoyed darts and a good game of crib. He was one of the first  affiliate members of the Mersey Branch #38, Royal Canadian Legion, Liverpool and will always be remembered as a huge Elvis fan.

He was predeceased by his sister Juanita Rosita Lloyd and nephew Joel Roy.

Cremation has taken place under the direction of Chandlers’ Funeral Home, Liverpool. At Reid’s request, there will be no funeral service. No flowers, donations may be made to the West Queens Recreation Center or the Southwest Port Mouton Cemetery. Online condolences may be made to www.chandlersfuneral.com

Offer Condolence for the family of Roy; Reid Martin