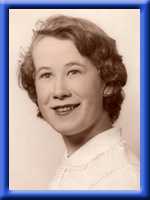 ROY – Elva Gertrude, known as “Deb”,74, of Milton, Queens County, passed away suddenly on Saturday, September 18th, 2010 in South Shore Regional Hospital, Bridgewater, with her daughter and best friend Jane at her side.

Born in Liverpool on July 5th, 1936, Deb was a daughter of the late George and Jean Grace (Stevens) Westhaver.

In her early years, Deb enjoyed playing softball and doing a little gardening. She was a former cook for Lanes in Liverpool for a a number of years. A devoted and beloved wife and companion of Schedule, Deb worked from home for the past 25 years as a bookkeeper for their wood contracting business and in recent years enjoyed their retirement with trips to their newly built cabin.

Surviving besides Schedule, her husband of 54 years, are her daughters: Jane (John Croft) of Mill Village; Pat (Dan) Christoph of Red Deer, AB; Janet “Peggy” (Bruno) Delisle of Waasis, NB; Son Greg (Michelle Whynot-Roy) of Milton. Grandchildren: Allen of Middlefield, Harmony and Michael, both of Alberta; Jacob and Evan, both of New Brunswick and Tyler of Milton. Great grandchildren: Nathan of Middlefield; and Brooke of Alberta. Deb is also survived by her sisters: Gladys of Danesville; Ellen of Milton; Judy of Liverpool. Her brothers Maurice of Liverpool; Victor of Milton and George of Liverpool.

She was predeceased by her sisters:  Margaret in infancy, Marion, and Sheila. Brothers: Burton, Jimmy and Vic.

Cremation has taken place under the direction of Chandlers’ Funeral Home, Liverpool.  A family memorial will be held at a later date. No flowers by request, donations may be made to the Heart and Stroke Foundation of Nova Scotia. Online condolences may be made to www.chandlersfuneral.com

Offer Condolence for the family of Roy; Elva Gertrude