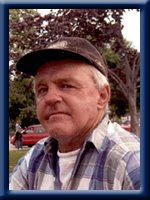 Born in Liverpool, he was a son of the late Roscoe and Catherine (Huphman) Roy.

Doug was well known throughout Liverpool and the surrounding area, having done odd jobs for practically everyone he knew. He was a man of integrity and could be counted on for his dedication to whatever he was asked to do and to see it to its completion. Doug loved Tim Horton’s in the morning; for his coffee and to socialize as well as cutting wood with his powersaw, but he especially loved spending time with his family.

He was predeceased by his brother Lawrence.

Visitation will be Friday, September 3rd, 2010 from 7 until 9 p.m. in Chandlers’ Funeral Home, Liverpool. Funeral service will be held Saturday, September 4th, 2010 at 11:00 a.m. in Trinity Anglican Church, Liverpool. Chaplain Donald Lawton officiating. Burial will be in Grace Anglican Cemetery, Western Head. No flowers by request, donations may  be made to the Queens Association for Supported Living, P.O. Box 520, Milton, NS, B0T 1P0. Online condolences may be made to www.chandlersfuneral.com

Offer Condolence for the family of Roy; Douglas Eugene