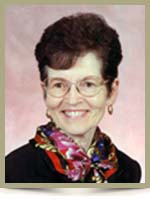 Bertie was born on June 7th, 1933, in Inglisville, Annapolis County, Nova Scotia, was the eldest child of  the late Donald and Adelaide “Marie” (McGill) Rideout.

Bertie moved to Maitland Bridge as a teenager where she worked in Alton Demmon’s General Store. It was there she met Allen Rowter and they married in 1951. She was devoted to this community and to the Church for all these years. Bertie’s beautiful gardens were a testament to the tender loving care she gave them and her sewing skills were known for it’s fine finished product.

She will be deeply missed by her surviving family, son Daniel and Bev (Veinot) of Conquerall Mills, grandson Nicholas Rowter and Kristy Fraser of Sherwood Park, Alberta, granddaughter Natalie Rowter-Baird and Michael, of Bedford, granddaughter Alissa Rowter of Bedford, and two great-grandsons, Kalen and Micah Rowter of Sherwood Park Alberta. She is also survived by her sister Una Truscott and Ray of Fort Saskatchewan, Alberta, sister-in-law Althea Rowter of Maitland Bridge, brother-in-law Dale Webb of Bedford, sister-in-law Sandi Rideout of Billerica, Massachusetts, USA, and seven nieces, nephews and their families. She had many wonderful and dear friends whom she leaves behind.

Offer Condolence for the family of Rowter; Ora Alberta “Bertie