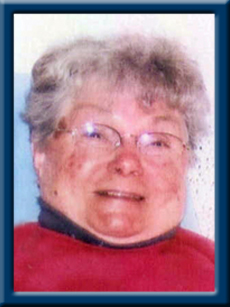 Born in Lake May, Northfield, Annapolis County, Esther was a daughter of the late Oliver John and Elizabeth (Adams) Corkum.

Esther was a longtime member of Maitland Bridge Baptist Church until it closed and then joined Kempt United Baptist Church. While Esther attended the Maitland Bridge Baptist Church, she was very active in the Sunday School, choir, organist when needed and served as a deacon and council member. She belonged to the sewing circle and Women’s institute in Maitland Bridge and to Kempt Missionary Society. Esther also worked at North Queens Nursing Home for approximately 17 years, the last three as a cook. She also cooked at Long Lake Camp for a summer. Esther was a former resident of Lohnes’ Rest Home in Scarsdale  for approximately three years before coming to North Queens Nursing Home. Everyone in both places were very kind and compassionate.

Besides her parents, Esther was predeceased by her husband Edward; her sisters Virginia Halliday, Pauline Robbins, Clara Adams, Anne Halliday and her brothers Willis, Albert and infant brother George.

Visitation will be Thursday, September 10, 2020 from 1:00 until 2:00 p.m. followed by funeral service at 2:00 p.m., both in Kempt United Baptist Church. Reverend Royce Getson officiating. Burial will be in Maplewood Cemetery, Maitland Bridge. Family flowers only, donations may be made to Kempt United Baptist Church, Canadian Cancer Society or the Heart and Stroke Foundation. Online condolences may be made to www.chandlersfuneral.com All those attending this service are reminded to bring their own masks, practice physical distancing and provide the funeral staff with information for contact tracing.

To see a webcast of Esther’s funeral service, please click on the button below:

Offer Condolence for the family of Rowter; Esther Lillian