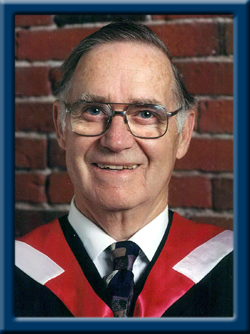 Dr. James Frederick Ross passed away peacefully at home in Harmony on August 31, surrounded by loved ones. Jim was born in Sussex N.B., the son of Frederick Ross and Etta Butland Ross RN. He was the last surviving member of his family.
Jim began his university education at UNB but was interrupted by World War 2 when he shifted gears to train as a paratrooper, receiving the rank of Company Sergeant Major. Just as his troop, the 1st Canadian Parachute Brigade was to be deployed, the war ended and he returned to university to fulfill the dream inspired by his mother to become a doctor.
Jim graduated from Dalhousie University Medical School in 1951. Following postgraduate training in Halifax and Toronto, he continued his studies as a travelling fellow in England and Europe. He became the first qualified plastic surgeon in the Maritime Provinces, beginning his practice in 1959. Jim was instrumental in the creation of the first two burn units in the Maritime Provinces. He specialized in the treatment of accident victims, cleft lip and palate reconstructions and burn treatments. He established the foundations of Plastic and Reconstructive Surgery at Dalhousie in 1972.
Jim was the author of numerous medical articles and served as President of the Canadian Society of Plastic Surgeons in 1982. He was committed to encouraging and supporting students in their medical studies and created a nursing scholarship at UNB in his mother’s name.
His surgical skills were internationally renowned. Jim was hosted by the Czech government, to thank him for his dedication and medical attention entrusted to plane crash patients of the Czech crash that occurred in Gander in 1967.
In 1976, Jim and three of his colleagues were invited by the Chinese Plastic Surgeon’s Association, a communist country at the time, to share medical knowledge and procedures. This information was invaluable at the time and augmented our medical techniques here tremendously.
Jim met Elizabeth Douglas, MD.F(C)PAED, in 1947 in medical school, married in 1950 and began a lifelong love story. Following his retirement Jim and Betty moved to their Harmony cottage which many would say was his favorite place on earth. He and Betty operated a small farm and entertained friends from far and wide with food from their expansive garden.
Jim’s hobbies included studying wood turning and he assembled a beautiful collection of wood art. He was a voracious reader; his particular interest was in military history. He was a proud supporter of the arts and local community projects.
For 18 years, Jim and Betty holidayed in New Zealand and established lifelong friendships there.
Jim had a genuine interest and love for the people in his community whether it be the hospital, university or the community in which he lived. He always took the opportunity to chat and share a story. His kindness and generosity were the hallmarks of his life. Anyone who ever met Jim would agree he was a great man. His compassion and dedication for patients, family and friends made him special.
He is survived by, his loving wife Elizabeth; son, Andrew (Janice); daughter, Susan and treasured grandsons Daniel and David; sister in law Muriel; nieces Audrey Lee, Kate, Joanne, Peg, Sheila and Heather and nephews Blair, and Rob.
He was predeceased by sisters Audrey Cummings RN, Thelma Marr, and Dorothy Friars RN..
Cremation has taken place under the direction of Chandlers’ Funeral Home, Liverpool. A memorial service will be held Monday, September 5, 2016 at 11:00 a.m. from North Queens Fire Hall, Caledonia. Reverend Carol Smith officiating. Reception to follow. Burial will be at a later date.
The Ross Family is grateful for the tender care Jim received from his caregivers which allowed him to remain in his home until his death. Special thanks to the first responders of the North Queens Volunteer Fire Department for their care and assistance.
Donations in Jim’s memory may be made to North Queens Volunteer Fire Department or North Queen’s Heritage House Museum. To share memories and condolences, please visit www.chandlersfuneral.com. In addition to Dr. Ross’ accomplishments is a documentary film produced by the CBC called “The Other Child” which chronicles a day in the life of burned children at the IWK and can be found on YouTube. https://www.youtube.com/watch?v=QLxhYHt8qHU