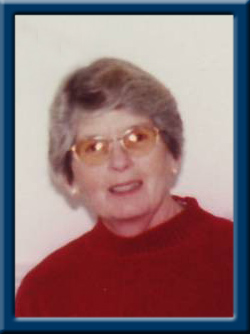 ROLLAND – Shirley Blanche, 83, of Port Joli, Queens County, passed away peacefully in South Shore Regional Hospital, Bridgewater on Wednesday, November 9, 2016.
Born in Port Mouton, Queens County, she was a daughter of the late Edgar and Evelyn (Roberts) Fisher.
Shirley served in the Royal Canadian Air Force from 1954 to 1957 and was stationed in Goose Bay, Labrador where she met her husband Arthur. Later, following her air force career, Shirley was a secretary for Minto Rentals and Construction in Ottawa. In her spare time, Shirley enjoyed knitting, hooking rugs, quilting and gardening. She will be fondly remembered by her family and friends as a loving mother and grandmother.
Surviving are her daughters Gail (Keith) Thomas of Dartmouth, Tanya Rolland-Pratt (Pat Shaw) of Cornwall, ON; her son Allen of Port Joli; her grandchildren Sara (Christopher) Mendoza and James (Allison) Pratt. Her sister Linda (Douglas) Hatt of Ottawa, ON.
She was predeceased by her husband, Arthur and her sister Evelyn McLean.
Visitation will be held Sunday, November 13, 2016 from 7 until 9 p.m. in Chandlers’ Funeral Home, Liverpool, NS. Cremation to follow. A memorial service will be held Tuesday, November 15, 2016 at 2:00 p.m. In Chandlers’ Funeral Chapel, Liverpool. No flowers, donations may be made to South Shore Regional Hospital, Bridgewater, NS. Online condolences may be made to www.chandlersfuneral.com.

Offer Condolence for the family of Rolland; Shirley Blanche